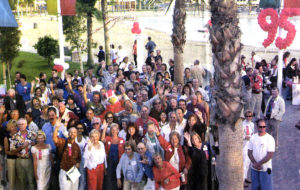 Jeremy Goddard has this way of waltzing across campus, of moving through the halls, of popping in and out of classrooms.

The seaside sprawl of Redondo Union High School is familiar turf to the Redondo Beach City Attorney. He knows the trick of closing a set of double doors just right so he can lock them firmly and easily behind him.

He knows what’s around the corner before he rounds it.

“This is the favorite place,” he said. “This is the school’s main hall. … On a daily basis, almost every student passes through this hall.”

It’s hours before the school’s big party Saturday to celebrate 95 years of education, and Goddard, a former principal and teacher at the high school, was giving tours of the campus to former students and anyone else interested.

About 75 people came by to take the tour, maybe hoping to jiggle some memories loose before the evening celebration at Seaside Lagoon.

“We had them in here and everybody ran to where their lockers were,” Goddard said, adding that he knew exactly where his old locker was, too.

He’s a 1961 graduate who later returned to teach government for 20 years before becoming principal. After serving in the school’s top slot for about four years, he moved into a position in the Redondo school district offices. He left the district in 1993 when he became city attorney.

He married alumna Lynda Stroot, a 1974 graduate, and is active in this year’s alumni committee.

Basically you couldn’t pull the Sea Hawk out of Goddard with a tow truck.

“When I was a young man and student here, the people who were at this high school were so good to me, they made a big difference in my life,” he said.

Much of this is lost when you’re younger, he added, saying it isn’t until a person starts aging that they understand the importance of having a great teacher to help guide them through the messy years of adolescence.

“When you get older, you realize how great that is.”

Although not all former students return to teach, many remain in the South Bay, especially Redondo Beach, and maintain a loyalty so fierce to their alma mater they still turn out for just about any school-related event.

Carl Dreizler, President of the RUHS Alumni Association and a 1972 graduate, is the driving force behind the aaaaaaaaaaaaaaaa

95th birthday bash. He, his mother and all his siblings are Sea Hawks.

“I had an awful lot of fun there, it was great,” he said.

Although he heard from people who though it odd that the school was celebrating 95 years, he has had people ask him why there aren’t more alumni events.

It isn’t just former students who bleed red (and white).

Jack McClain taught painting, drawing, sculpture and many other arts at the high school from 1954 to 1965. He still lives in the South Bay.

“The school itself, it was a completely wonderful experience. It was fantastic, we had great teachers, I’m not kidding,” said the retired McClain. “After World War II we had a lot of great teachers.”

“It was invigorating … It’s the way a faculty should operate.”

He stays in contact with some of his former students who have moved on to become professional artists throughout the country. He’s even been to one student’s recent gallery showing in Redondo Beach.

“This is one of the gratifying things, I used to see them down on the beach and it was, ‘Hi, Mr. McClain,’ ” he said.

There is evidence of his tenure all over the campus, in the form of various works of art, including a stainless steel bas relief piece in the school’s auditorium and a large mural in the cafeteria.

“There was always something every year,” he said, “yearbooks, whatever, a mosaic mural in the boys gym, murals on the language arts department. I guess every space that I could find, just give me wall.”

He’s been at the school recently, working on a mural he designed and painted in 1964. The names of his students faded but the mural is in great condition.

As secretary for the school’s principal, Tracy Hattingh gets to stay about as close as a person can get to the school she was graduated from in 1974.

“My most fond memory of high school was the atmosphere of how much fun it was being a student … just the fact that you did things as a teenager and your social life was based around the high school,” she said.

Hattingh said the school has always been a part of her life, starting when her mother was graduated in 1949 and continuing to when her children were graduated in the early 1990s.

“We have an old saying here at Redondo, you’re a Mustang for four years but you’re a Sea Hawk for life,” she said, referring to the school’s longtime crosstown rival, Mira Costa High School. “I guess I’m so overtly red and white, I’m just gushing red and white.”